One Part Woman is an interesting read (I took close to a month only because I undertook a lot of travel during this time). A striking tale, it deals with the life of a couple – Kali and Ponna – and the tribulations they face for being childless. The jibes, the insinuations, the off the cuff remarks, the vituperative callousness of people – all shake the very foundations of their matrimony and push them to consider participating in the chariot festival of Ardhanareeswara ( Mathorubhangan in Tamil which translates in English to One Part Woman). The festival night is marked by a custom – childless women can engage in consensual sex with any stranger. What happens next is what the reader has to find out for I don’t want to be a spoiler! 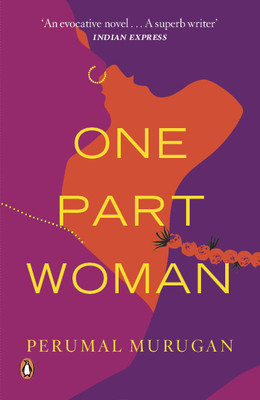 In olden days when there were no procedures like IVF, this probably was a sane way of overcoming the tag of being barren. Besides children born to such unions were called God’s children. Under this context one wonders why there should have been such a furore which eventually forced the writer Perumal Murugan to kill his Muse! Sad, it is not only Tamil’s loss but also to every Indian for there could have been more translations in English / regional languages to revel and regale in reading good books – for Perumal Murugan is a compelling writer.

The narrative technique used is perfect for the unravelling of the plot – it flits between the past and the present – as memories and realities of Kali and Ponna. It is striking that the novel begins and ends with the description of the Portia tree which seems to be the silent witness to the intricacies of the evocative yet suspenseful happenings that are narrated with urgency, poise and élan.

Am sure that reading the novel in Tamil would be a literary pleasure, thanks to the lyrical and intense nature of the theme. For me a Tamil read would be a struggle but not impossible – I could actually translate a lot of the conversations into Tamil and enjoy it better.

2 thoughts on “One Part Woman”