I woke up to darkness all around me. So I turned and closed my eyes once more, only to be startled by the clang of the bell announcing it was 4.00 am. Power has not been restored. After over 14 hours without electricity and switching on the motor to fill the overhead tank, I knew water would be scarce. The early bird catches the worm. I just about managed to get some water for my morning ablutions before I saw the water trickle, drip and then stop. Ouch, I cannot have a bath! The downpour had left the atmosphere cool and it was better not risking a cold water shower even if water were available, I reasoned. The Dhamma volunteer had kept a couple of emergency lamps on the path to the meditation hall and so we did not have to stumble along.

It’s the sixth day today and we have already clocked over 50 hours of meditation! Yes, a good many hours were spent on training the mind which galloped hither and thither, bringing it back to awareness and attention. A couple of months ago, I would have thought of undergoing such intense meditation as impossible. But here I am – in the thick of it all and relishing it to a great extent. It’s at such times one looks at oneself with fresh eyes and respect. 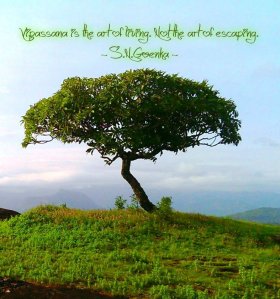 Today too two participants who wanted to leave the camp were promptly shown back to the meditation hall with the advice to give Vipassana an earnest trial. In the course of the day’s meditation, we were to move our awareness from head to toe part by part and observe sensations and then go in the reverse direction. As I paid attention to the observations without reactions, I noticed that a lot of them were subtle tingling/warm sensations. However there seemed to be some gross sensations which gave me dull aches especially around my throat, nape and shoulder areas. I observed the pain on both knees too as I continued to sit on the floor. The teacher called us to him in batches of four to ask questions and make clarifications regarding the technique. A fellow meditator complained that she could not sleep at night and the teacher replied that it was normal as one is not doing physical work and at the same time spending close to 10 hours in meditation. This answer comforted me a great deal too. And when my turn came, he said he was happy to see me not using the chair and earnestly make an effort to overcome the sensation of pain. His appreciation was a great incentive and I continued to sit down cross-legged despite the numbing pain which by now I had learned to take in my stride.

The point driven home time and again by the teacher and in Acharya Goenka’s video discourses was that the entire structure of the body is composed of sub-atomic particles called Kalãpã – consisting of one of the four elements, earth (solid), water (liquid), air (gaseous) and fire (temperature). However, when one starts to examine the reality within, one will understand the elements at the subtle level. Thus if the fire element is predominant, the sensation is either heat or cold; earth element reveals heaviness or lightness; air element has everything to do with movement and water with cohesiveness. And when observes the sensations, all the sankhãrã or the accumulated karmic burdens of all our lifetimes arise and pass away. They burn up layer by layer till even deep rooted ones show up and just evaporates. It’s probably this that’s causing me those gross physical sensations. What began as simple discomforts in the morning were threatening to take a much painful shape by night! And I was just not looking forward to another sleepless night accompanying an already aching shoulder.